Amsterdam is one of the oldest and most vibrant European business centres, with rich trade and business history, being the leading commercial and financial centre of the world. In 2019, an incredible number of 19 million travellers visited Amsterdam —  a number that, pre-pandemic, was expected to increase 50% by 2030.

Headquarters  of the most prominent Dutch and global companies and banks are based here. The Golden Age of Dutch economy continues in the XXI century. Amsterdam’s tourism industry has been hit hard by the pandemic, while the coronavirus has kept many business tourists away from Amsterdam, however, in 2021 Amsterdam travel restrictions will be relaxed, business tourism is to be revived, with more quality and chic.

On the flip side, post pandemic business tourism prospective of Amsterdam are shiny in all aspects spanning from to environmental, economic to socio-cultural revival of tourism development.

Amsterdam has always paid respect to the socio-cultural authenticity of host communities, conserving their built and living cultural heritage and traditional values, as well as contributed a lot to inter-cultural understanding and tolerance.

Cheap First Class experts are expecting a gradual restart to international tourism in Amsterdam. In the meantime, Cheap First Class provides the best business and first class flight deals to Amsterdam available to  to encourage business tourists to explore the city safely, which will definitely help support the reopening of businesses and the cultural sector in 2021.

Why Fly to Amsterdam, the Business Capital of Netherlands

The Kingdom of Netherlands has one of the most intriguing cities as its capital – Amsterdam. Having been established more than eight centuries ago as a small fishing village, Amsterdam later became one of the main ports in the world during the Dutch Golden Age. Further development of this industrial and trading center included the expansion of the city up to contemporary state.

Amsterdam has  These 165 canals divide the city into a series of small islands connected by over 1200 bridges, with the oldest completed in 1648.

Amsterdam is permeated with a vast array of water canals over 100km in length, around 60 miles. that helped this city to become entitled by UNESCO as the “Venice of the North”. In fact, the city of Amsterdam consists of more than 90 islands which are connected by approximately 1,500 bridges. This fact makes this city unique and unrepeatable. Amsterdam’s climate is considered mild with prevailing westerly winds; in a nutshell, the city is perfect for visiting at any season of the year! So, if you are looking for cheap first class tickets to Amsterdam, you must be wondering which place you should resort first. Let’s find it out! 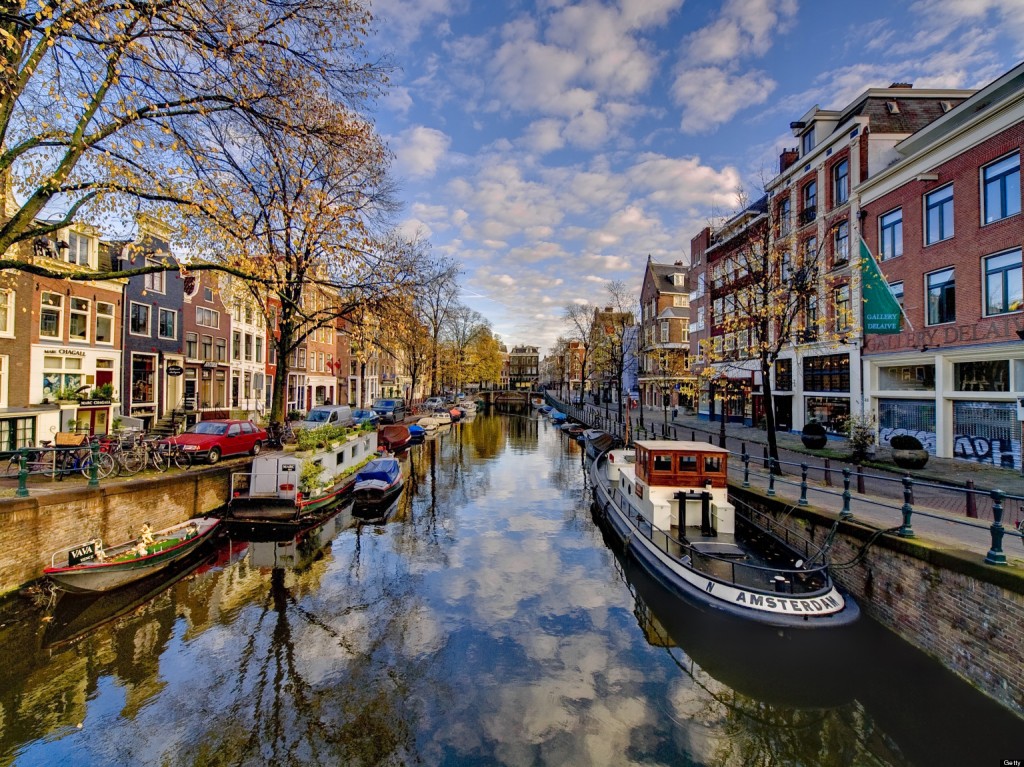 The city of Amsterdam looks rather historical than urban; although, you should not think about it as a legacy of past eras. It is a unique mix of old and well-maintained heritage of the Dutch Golden Age and modern buildings and highlights.

Amsterdam has over fifty museums, including famous Rijksmuseum, Van Gogh Museum and Stedelijk Museum. You obviously should visit the fascinating Dam square, which lies in the heart of the city; you can find the facts and clues about the city and the Kingdom in the Historical Museum, or enjoy the classical façade of the Royal Palace, which was used as the town hall.

Do not forget to stroll through Rembrandtplein (named after famous Amsterdam resident and Baroque painter Rembrandt Harmenszoon van Rijn) where you can find a number of traditional Dutch pubs that play authentic Dutch music; also, this area is lined with shops, hotels, and restaurants, which makes it one of the biggest tourist attractions. Talking about uniqueness, this is the city where you can find precisely the most popular red-light district in the world, De Wallen. This is also a center of nightlife, but aside from clubs and coffee-shops that legally sell marijuana, you can find more than 300 one-room cabins rented by workers of the sex industry that offer their services. But do not worry – these districts are separated from the city visually by red lanterns, so if you don’t want to visit them – you have a chance to distance them. You may please your family with the oldest zoo in the Netherlands – Artis Zoo, which is also famous for unique canal aquarium; a planetarium may surprise your kids with a trip through the Universe. If you take a business class to Amsterdam, it should not be a surprise that it is a financial and industrial core of Holland. More than 500 national and political facilities are headquartered in this city, likewise huge corporations and banks, such as Heineken International, Delta Lloyd Group, Philips, and ING Group. Also, the Port of Amsterdam, one of the oldest and biggest in Europe, plays a big role in the growing wealth of the city, with its great cargo throughput and myriads of cruise ships every year.

Things to See in Amsterdam

The Amsterdam Stock Exchange, which is now collaborated with Paris and Brussels Stock exchanges and called “Euronext” is one of the oldest and powerful stock exchanges in Europe with a unique history of development. Many fashion brands, including G-star, 10 feet, Viktor & Rolf have Amsterdam as their host.

Amsterdam Airport Schiphol is situated few miles southwest of Amsterdam and is the largest international airport of the Netherlands. It services as a main hub for KLM airlines, which provide high-quality service for those who decided to buy Amsterdam business class tickets. You can use cheapfirstclass.com to get discounted first class tickets to Amsterdam. But believe us, no matter which airlines you choose – an Amsterdam business class flight is always a great accompaniment to your trip to Holland.

Amsterdam is one of the oldest and most vibrant European business centres, with rich trade and business history, being the leading commercial and financial centre of the world.

Headquarters  of the most prominent Dutch and global companies and banks are based here. The Golden Age of Dutch economy continues in the XXI century. Amsterdam’s tourism industry has been hit hard by the pandemic, while the coronavirus has kept many business tourists away from Amsterdam, however, in 2021 Amsterdam travel restrictions will be relaxed, business tourism is to be revived, with more quality and chic.

Self-quarantine Upon Arrival in the Netherlands